The Master and His Emissary:

The Divided Brain and the Making of the Western World This book argues that the division of the brain into two hemispheres is essential to human existence, making possible incompatible versions of the world, with quite different priorities and values.

“I love this book above all others because it promises to help me understand paradoxes that have puzzled me all my life.”

‘This is a very remarkable book … McGilchrist, who is both an experienced psychiatrist and a shrewd philosopher, looks at the relation between our two brain-hemispheres in a new light, not just as an interesting neurological problem but as a crucial shaping factor in our culture … clear, penetrating, lively, thorough and fascinating … splendidly thought-provoking … I couldn’t put it down.’

Now available in a larger format, a fascinating exploration of the differences between the brain’s right and left hemispheres and their effects on society, history and culture. Why is the brain divided? The difference between right and left hemispheres has been puzzled over for centuries. In a book of unprecedented scope, Iain McGilchrist draws on a vast body of recent brain research, illustrated with case histories, to reveal that the difference is profound – not just this or that function, but two whole, coherent, but incompatible ways of experiencing the world. The left hemisphere is detail-oriented, prefers mechanisms to living things, and is inclined to self-interest, where the right hemisphere has greater breadth, flexibility and generosity. This division helps explain the origins of music and language, and casts new light on the history of philosophy, as well as on some mental illnesses. In the second part of the book, he takes the reader on a journey through the history of Western culture, illustrating the tension between these two worlds as revealed in the thought and belief of thinkers and artists, from Aeschylus to Magritte. He argues that, despite its inferior grasp of reality, the left hemisphere is increasingly taking precedence in the modern world, with potentially disastrous consequences. This is truly a tour de force that should excite interest in a wide readership.

Most scientists long ago abandoned the attempt to understand why nature has so carefully segregated the hemispheres, or how to make coherent the large, and expanding, body of evidence about their differences. In fact to talk about the topic is to invite dismissal. Yet no one who knows anything about the area would dispute for an instant that there are significant differences: it’s just that no-one seems to know why. And we now know that every type of function – including reason, emotion, language and imagery – is subserved not by one hemisphere alone, but by both. This book argues that the differences lie not, as has been supposed, in the ‘what’ – which skills each hemisphere possesses – but in the ‘how’, the way in which each uses them, and to what end. But, like the brain itself, the relationship between the hemispheres is not symmetrical. The left hemisphere, though unaware of its dependence, could be thought of as an ’emissary’ of the right hemisphere, valuable for taking on a role that the right hemisphere – the ‘Master’ – cannot itself afford to undertake. However it turns out that the emissary has his own will, and secretly believes himself to be superior to the Master. And he has the means to betray him. What he doesn’t realize is that in doing so he will also betray himself.

The book begins by looking at the structure and function of the brain, and at the differences between the hemispheres, not only in attention and flexibility, but in attitudes to the implicit, the unique, and the personal, as well as the body, time, depth, music, metaphor, empathy, morality, certainty and the self. It suggests that the drive to language was not principally to do with communication or thought, but manipulation, the main aim of the left hemisphere, which manipulates the right hand. It shows the hemispheres as no mere machines with functions, but underwriting whole, self-consistent, versions of the world. Through an examination of Western philosophy, art and literature, it reveals the uneasy relationship of the hemispheres being played out in the history of ideas, from ancient times until the present. It ends by suggesting that we may be about to witness the final triumph of the left hemisphere – at the expense of us all.

The RSA Animate explainer video of ‘The Master and his Emissary’ An Exchange of Views & Essays

Reply by Iain McGilchrist to publicity for Top Brain, Bottom Brain, suggesting that the authors have ‘debunked’ the ‘old left/right theory’

On 6th August 2013 The New Republic carried this article by Steven Pinker, entitled ‘Science is Not Your Enemy: An Impassioned Plea to Neglected Novelists, Embattled Professors and Tenure-less Historians’ 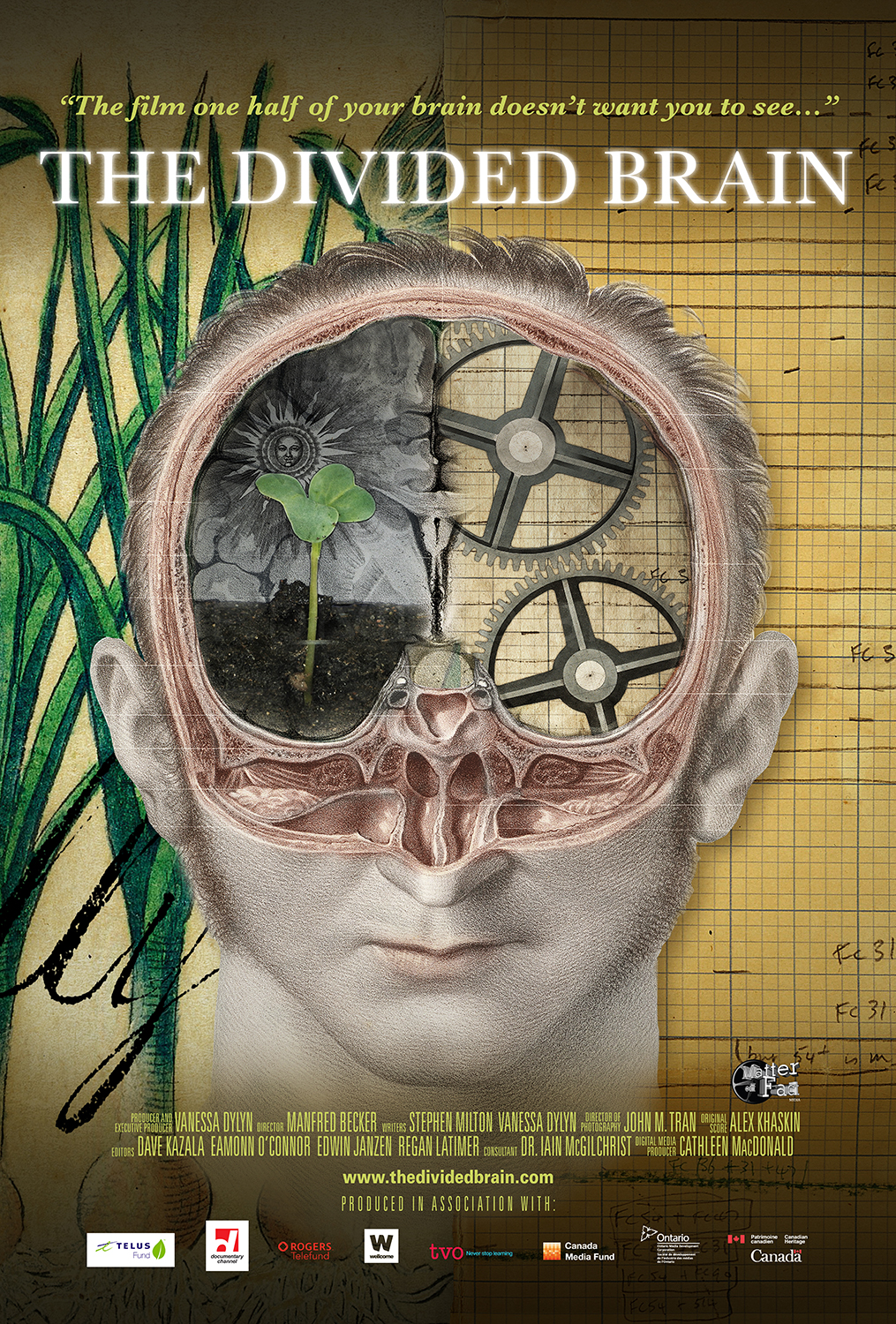 THE DIVIDED BRAIN is a mind-altering film that will radically change your understanding of the world and yourself. Renowned psychiatrist, neuroscientist and author Dr. Iain McGilchrist, takes us on a journey to understand how our brains have made us a powerful species, while simultaneously creating social and environmental problems that threaten our very survival and the future of our planet. When a brain is in balance, individuals and cultures thrive. While society searches for solutions, McGilchrist argues that the real problem is inside our heads.

Find Out More in the Members Area

This is an unseen clip from The Divided Brain movie footage. Many more unseen clips are available in the Members Area.

Dr Colwyn Trevarthen is Professor of Child Psychology and Psychobiology, School of Philosophy, Psychology and Language Sciences, University of Edinburgh, collaborator with Nobel Prize-winner Roger Sperry at Caltech, and one of the world’s most distinguished living researchers on the perceptuomotor and cognitive functions of the cerebral hemispheres.